Know Thyself, “Act” on Thy Brand

To thine own self be  true, and it must follow, as the night the day, thou canst not then be false to any man. Polonius to Laertes Hamlet Act 1, scene 3

All companies have two things: products and competitors. But now, these are seldom the axis where success is determined. Globalization, hastened by technology, has created new supply, demand and purchase patterns profoundly disrupting every industry.

Disruption is when a company invents or extends a product that broadens the target market creating new transactions. Occasionally, the new transactions will replace or reduce legacy ones.

Michael Treacy and Fred Wiersema created a simple framework in 1977 to explain how successful firms focus and distinguish themselves in one of three areas translating as price, product or service.

While the other two attributes can’t be ignored, firms that try to focus on more than one struggle sometimes with disastrous implications.

The stress comes from inevitably confused marketing messages to the customer. More devastating are the conflicting internal messages undermining focus. Drastic consequences await companies that try to sell themselves one way but actually operate in another. This is depressing because mostly, it isn’t deliberate but just not well thought out and properly socialized.

A New Framework of Disruption

They do this often selling identical products with identical pricing and customer experience.

The Monitor Group (prior to acquisition and now marketed as “Doblin” an innovation practice of Deloitte Digital within Deloitte Consulting LLP, a subsidiary of Deloitte LLP) expanded the Treacy framework illustrating new hills to be occupied they refer to as Ten Types of Innovation. 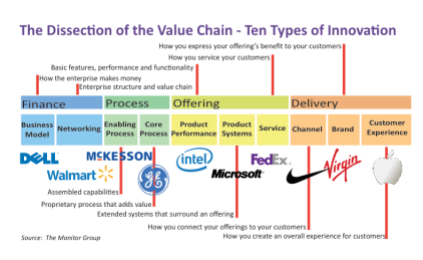 Within any industry, and some define themselves this way, there are ten areas that companies can dominate to compete in new and unique ways. The illustration describes these dimensions with examples of companies that either defined the category or in some occasions, reinvented the dimension to drive a new a business model. For instance, Walmart clearly redefined the enterprise structure and value chain exploiting it to a very disruptive business.

Apple disrupted two industries at once leveraging the Internet, music players and distribution by linking key value chain components. Branson attributes the closure of the last two Virgin record stores in June of 2009 to Apple’s music (multi-media) ecosystem. Not too long after, this ecosystem was extended to the mobile phone market.

While technology has indeed quickened the pace of change, disruptions of any magnitude don’t happen overnight. Focus in the right place such as product, pricing and customer experience and excluding other factors is why they are often blindsided.

Quarterly measured companies rarely have the attention span to reinvent themselves. This is exasperated risking a current revenue stream or upsetting their carefully cultivated ‘operationally excellent’ Wall Street profile.

The disruptors typically come as new companies like Amazon.

Everyone lifts Apple on a high pedestal because they continually demonstrating their rare DNA to disrupt categories. But all of those disruptions have a common trait, they are all blue ocean, going after new categories. If a new direction risked a current revenue stream, would they be as ambitious?

In a sense, this is putting Apple into the same place occupied by other legacy companies looking much more like an AT&T or Verizon, relying on ‘operational excellence’ than disruptive innovation.It will be interesting to see when Apple’s ecosystem takes on an opponent like Google, who has demonstrated a willingness to make new markets. Suppose they were to offer their Pixel phone for $200 with unlimited voice, text and data service, forever? Do not for a second think they couldn’t.

It will be interesting to see Apple’s ecosystem finally go around the block and take on opponents. One like Google who has demonstrated a willingness to make new markets. Suppose they were to sell their Pixel phone for $200 with free lifetime unlimited voice, text and data service? They have a track record of making this type of exploitation work for them.

The bottom line is, figure out where you are. If it is 1912 and your company is singularly focused on making “the industries best buggy whip,” embrace that you might not retire there.